Skip to content
The estimated net worth of Teresa Earnhardt is $50 million USD.

Teresa was born in Hickory, North Carolina, the daughter of Hal Houston and the niece of Tommy Houston, legendary Busch Series driver. Teresa is a graduate of Bunker Hill High School in Claremont, North Carolina.[1] She has a degree in commercial art and interior design.[2] Teresa met Dale Earnhardt, NASCAR driver, at a race in the late 1970s. The two married November 14, 1982. It was Dale's third marriage. They lived on a 300-plus acre farm near Mooresville, North Carolina. Taylor Nicole Earnhardt was born to the couple on December 20, 1988.[3] 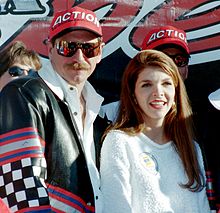 Dale and Teresa Earnhardt in the mid-1990s

Teresa headed Dale Earnhardt, Inc. (DEI) during four Busch Series championships in 1998, 1999, 2004 and 2005 plus two Craftsman Truck Series championships in 1996 and 1998. [2] Her first Daytona 500 win as a team owner occurred when driver of the #15 Chevrolet driven by Michael Waltrip won at the 2001 race. The win, however, was overshadowed by her husband's death in a crash during the final lap of the race.[4]

Teresa's strained relationship with her stepson Dale Earnhardt Jr. ended in May 2007 when he announced he would not be returning to DEI for the 2008 season after an agreement could not be reached that suited himself and his three siblings who claim equal right to the business.[5][6]

Teresa was unable to retain the sponsorships of Budweiser and U.S. Army, who pulled support following the exit of Earnhardt Jr. This was a major factor leading to the merger with Chip Ganassi Racing with Felix Sabates in November 2008 that formed Earnhardt Ganassi Racing.

In 2014, Teresa's ownership of the EGR team was absorbed by Ganassi, which reverted the name back to Chip Ganassi Racing. When Chip Ganassi was asked why the team released her, he replied "Teresa was a good partner but she was no longer there. So I just bought her share of the team and reverted the name."[9]

Dale Earnhardt Inc. continues to operate in Mooresville, NC, as the parent company of the varied Earnhardt businesses, and Teresa works to continue her late husband's legacy through the work of the Dale Earnhardt Foundation.

In May 2016, Teresa sued stepson Kerry Earnhardt for using the Earnhardt name in his business venture. Kerry and his wife René were planning to market a line of homes and furniture under the name "The Earnhardt Collection".[5][6] On July 27, 2017, Teresa won an appeal, which required the U.S. Trademark Trial and Appeal Board to clarify its decision to allow Kerry to use the name "Earnhardt Collection" in his business.[10][11]