Skip to content
The estimated net worth of Sanaa Lathan is $4 million USD.

On stage, Lathan was nominated for a Tony Award for her performance on Broadway in A Raisin in the Sun and starred in 2010 in the all-black performance of Cat on a Hot Tin Roof at the Novello Theatre in London.[2]

Lathan was born in New York City.[1] Her first name means "art" in Swahili[3] and "piece of art" in Arabic. Her mother, Eleanor McCoy, was also an actress and dancer[1] who performed on Broadway with Eartha Kitt. Her father, Stan Lathan, worked behind the scenes in television for PBS, as well as a producer on shows such as Sanford & Son and Russell Simmons' Def Comedy Jam. Her brother is Tendaji Lathan, a well known DJ. She attended Manhattan Center for Science and Mathematics.

She graduated from UC Berkeley, with a bachelor's degree in English. Lathan then attended Yale University, and earned a master's degree in drama.[4]

Following her training at Yale, where she studied with Earle R. Gister and performed in a number of Shakespeare plays, Lathan earned acclaim both off-Broadway and on the Los Angeles stage. Encouraged by her father to make Los Angeles her professional base, she found early television roles in episodes of such shows as In the House, Family Matters, NYPD Blue, and Moesha.[1] 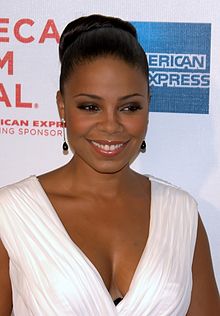 Lathan at the 2009 Tribeca Film Festival premiere of Wonderful World

In 1998, Lathan earned a degree of recognition with her role as the mother of Wesley Snipes' title character in Blade.[5] She followed this the subsequent year with a role in Life with Martin Lawrence and Eddie Murphy and back-to-back turns in The Best Man and The Wood. The Best Man was a comedic ensemble film, starring Taye Diggs, Nia Long, Harold Perrineau Jr., and Morris Chestnut.[6] The Best Man went on to become one of the top ten highest grossing African American films in history and Lathan received a NAACP Image Award nomination for her performance. The Wood, another ensemble film starring Diggs and Omar Epps, cast her as the love interest of Epps.[5]

Lathan and Epps were reunited onscreen in Gina Prince-Bythewood's Love & Basketball, this time playing a couple as passionate about basketball as they are about each other.[7] Her performance in Love & Basketball earned her the 2001 NAACP Image Award for Outstanding Actress in a Motion Picture, as well as an Independent Spirit Award nomination for Best Actress and a BET Award. In 2000, Lathan appeared in the Off-Broadway production of The Vagina Monologues along with Teri Garr and Julianna Margulies.[8]

In 2001, Lathan earned additional acclaim for her work in the multicultural comedy film Catfish in Black Bean Sauce.[9] Next was her second collaboration with Prince-Bythewood: Disappearing Acts; it is based on a novel by Terry McMillan.[10] In the HBO film, Lathan is cast as an aspiring singer/songwriter in love with a carpenter, played by her Blade co-star Wesley Snipes. For her work in the film, Lathan earned an Essence Award for Best Actress. That year, she was named by Ebony magazine as one of its 55 Most Beautiful People and was honoured by Essence magazine and Black Entertainment Television. In 2002, Lathan starred in the romantic comedy film, Brown Sugar, alongside Diggs, Queen Latifah, and Mos Def.[11] Lathan's performance earned an NAACP Image Award Nomination for Outstanding Actress in a Motion Picture. The film also received an NAACP Image Award nomination for Outstanding Motion Picture.

In 2004, Lathan starred on Broadway in A Raisin in the Sun with Sean Combs, Audra McDonald, and Phylicia Rashad. Lathan received a Tony Award nomination for Best Performance by a Featured Actress for her portrayal of Beneatha Younger. Several years later, Lathan reprised the role in an ABC Network production of A Raisin in the Sun.[12] 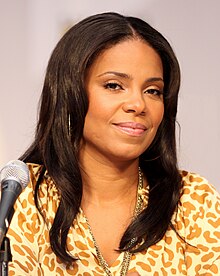 In 2003, she co-starred with Denzel Washington in Out of Time.[13] The following year, she was cast in the lead role in Alien vs. Predator.[14] The film was a major success grossing over $171 million worldwide.[15]

In 2006, she co-starred with Simon Baker in Something New, a romantic comedy;[16] as Michelle Landau, the much younger wife of a Texas businessman (Larry Hagman) during the fourth season of the television series, Nip/Tuck;[17] and in 2008 as Andrea in Tyler Perry's The Family That Preys. The film also features Alfre Woodard and Kathy Bates; it was released in the U.S. on September 12, 2008.[18] In an interview with NPR, Lathan said the script took a fresh approach to telling an interracial love story, by describing the internal conflict some African-American women confront when it comes to dating interracially. "I feel like with black women, in a way, I feel like it has been harder for us to go there just in terms of culturally. I know that there's this statistic that says that like 13 percent of black men are in interracial relationships. And don't quote me on this, but it's like four percent or three percent of black women are in interracial relationships; and I think that says a lot about, you know, either black women's loyalty to her black man or her guilt about stepping outside of the race."[19]

In 2013, Lathan reprised her role in The Best Man′s sequel, The Best Man Holiday.[23] In 2016, she was cast with the ensemble of the sequel of Now You See Me entitled Now You See Me 2, which was a box-office success, and she was cast in the Sci Fi movie Approaching the Unknown. In 2017, Lathan returned to TV in a lead role in the series Shots Fired, and also appeared in the movie American Assassin. Lathan was then added to the main cast of The Affair, appearing in its fourth and fifth seasons, and starred in the Netflix film Nappily Ever After.